Next to nothing has been written about Spontaneous Combustion. I could not find evidence of any academic articles, and the broader field of film criticism is almost as dire. There’s a fantastic essay on it as part of the AV Club’s “Overlooked” column, written by Ignatiy Vishnevetsky after Tobe Hooper’s passing. It also received an entry in the Birth Movies Death column “Say Something Nice”, which is about, you guessed it, finding something good to say about a “bad” film (“certainly bad, but enjoyably so”??? Don’t get me started on how disassociated all the pans are from what this movie is). It is always noted as “minor” Hooper, a sorry footnote that continued the downward trajectory of a career marked with firings and failures. And it received only three votes in the Top Ten By Year: 1990 poll results, the respondents of which cover an extremely wide-ranging spectrum of tastes. But I, along with maybe five other people, think Spontaneous Combustion is a major work. Its biggest proponent is the great Japanese filmmaker Kiyoshi Kurosawa, who regularly cites it as a major influence on his work, and names it as one of his three favorite films!

Despite being a horror icon, the majority of Tobe Hooper’s work is largely dismissed. It’s not hard to see why. As Vishnevetsky all too accurately puts it, “his movies just couldn’t get a grip on themselves”. It’s a considerable part of what made him an unmistakable, and erratically uneven, auteur, not just within the scope of his filmography but within the films themselves (even the three all-timers, which is three more than most filmmakers). They all tend to feel one degree away from being unwatchable, executed with feeling over cohesion by fusing some combination of anger and nastiness with transgression and blatant political ire. In Spontaneous Combustion, the destruction and purely unmanageable chaos that Brad Dourif can’t keep inside of him could easily double as a descriptor for Tobe Hooper as a director.

The confounding elaborate conspiracies and rapidly escalating body horror of Spontaneous Combustion (which Hooper has a story and screenwriting credit on) will scramble your brain — as they should. Our inability to keep up with its convolutions put us in the deep end with Sam (Dourif). If your life was revealed to be a manipulated falsehood while, simultaneously, you turned into a pyrokinetic byproduct of nuclear testing: would you be able to make sense of it? It’s like if The Truman Show took place in one day, and instead of Truman trying to get out of Seahaven, a fireball was trying to get out of him.

The love I have for Brad Dourif as a performer is impossible to adequately express, but suffice it to say he’d be in a list of my five favorite living actors (along with, today at least, Song Kang-ho, Denzel Washington, Kurt Russell, and Robert De Niro). Spontaneous Combustion is the perfect example of how crucial he is to any project lucky enough to have him. He has this hypnotic ability to ensure you hang onto his every word regardless of the material’s quality. The sound of his voice is a rolling pull that, to quote Lloyd Christmas of all people, is like a “tractor beam….sucks you right in”. There is something explosive in him even before casting him in a movie where there’s literally something explosive in him. He embodies the ache of the outside and the inside in equal measure, and can go Big while retaining a crucial emotional transference that ensures he doesn’t become pure spectacle. Watching him in this is agonizing, and essential to the film’s impact, because of course he feels like he’s actually being ripped apart at the seams. His face projects the helpless inability to process the lie of his life…because it’s already ending.

The pall of death hangs heavy over Spontaneous Combustion. That feeling kicks in with the, correctly described by Vishnevetsky, Lynchian opening (usually an overused and lazy descriptor, but I promise it actually applies here and is not just code for “weird”!) in which an Ozzie and Harriet-like couple become test subjects for an anti-radiation vaccine. The American Dream is depicted as pure governmental exploitation, a bargain and commitment to country that guarantees annihilation. The quickness with which Sam’s internal annihilation takes hold, and that the crumbling of his external life is (while related) not directly caused from the crisis of his body, is overwhelming. It is the total claustrophobia of fate dealing you a bad hand. 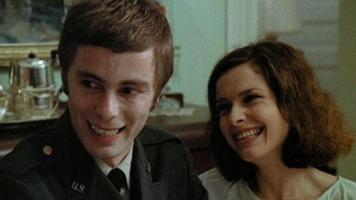 That overwhelming emotional weight that Spontaneous Combustion carries in tow recalls Bob Clark’s masterpiece Deathdream (a film that provoked a once-in-a-half-decade art-instigated emotional exorcism, so I don’t make the comparison lightly). A similar inescapable thrum of sadness runs under both. These are two horror films in which American atrocities are made manifest and metaphor in the human body. However, it is a manifestation of opposites. In Deathdream, Andy, a soldier coming back from Vietnam, is already dead. He is a zombie paper doll with the functionality of a ventriloquist’s dummy that’s been left in an attic corner; a participant and victim of an imperialist war, bringing and spreading that death back home. Sam though, is purely a victim of history; the offspring of a horrific atomic experiment, whose life is marked from day one. One man is lifeless while the other carries too much within him. Both are deadly and both are tragic. To quote Vishnevetsky once again, “the image of flames shooting out of rips and holes in the Dourif character’s skin is a powerful one. It has a sick and sad poetry to it, like Leatherface’s skin mask.”

*I didn’t have room to work it in, but this is a gorgeous film. There are such foreboding use of bright color and atmosphere, empty hallways and spaces

*I also didn’t have room to shout-out Cynthia Bain, the female lead, who is so good here. She reminds me a lot of Radha Mitchell, and I wish her career was more lively.

Error: Twitter did not respond. Please wait a few minutes and refresh this page.